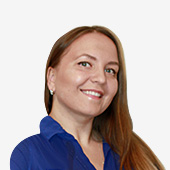 Olesya is the backbone of ASMART's team of experts. She spearheads current projects which entails good communication and social skills to manage our clients well. Her knack of identifying clients' needs is her most impressive quality as this helps our company as a whole to function to its full potential.

Olesya has been part of our company since the very beginning. With her degree with Economics and extensive experience in Marketing, Olesya is able to find the perfect solution for every client’s budget.

Her main goal is to take good care of our clients.

She takes pride in being resourceful in finding creative solutions and innovative ideas. Olesya is the forefront of ASMART and we are proud to say that we are being represented impeccably.

#socialmedia
The new way of marketing and information dissemination has certainly become a global phenomenon which we popularly know as social media. Nearly everyone owns at least one social media account whether this may be Facebook, Twitter, Foursquare or Pinterest.

The new way of marketing and information dissemination has certainly become a global phenomenon which we popularly know as social media. Nearly everyone owns at least one social media account whether this may be Facebook, Twitter, Foursquare or Pinterest. Those are just few of the countless social media platforms out there—many of which are suitable for users of all ages. Being “connected” is somewhat already a necessity in today’s world. Take a week long hiatus from this virtual realm and you may let pass relevant information like news, updates and current events. Nonetheless, the secret to being up-to-date with these platforms is not by joining the bandwagon, but by recognizing the trends and its patterns.

Trends are forecasted by media experts. If you are in the pursuit of making your social media platform work more efficiently, it is advisable that you pay attention to these trends.

Yup! You heard it right. You won’t need to feel embarrassed anymore by handing your coupons when paying your bill. Some social media applications such as Foursquare and Twitter have recently integrated a new way of shedding those extra bucks to your tab. Just by “checking-in” a location or by merely tweeting, you can now avail of instant discounts at selected establishments. Imagine the convenience of this novelty. Soon enough, more and more proprietors will take advantage of this service as well.

The next best thing to downloading music and movies is live broadcast TV— over the internet. Barry Diller’s most recent venture is called Aereo, which enables users to watch TV online. Recent studies have shown that people prefer acquiring individual content (selected songs or TV series episodes) rather than watching it on cable TV. Today’s culture has evolved into having a “customizable” lifestyle where every element is chosen to suit a person’s preference.

Soon enough, magazines and newspapers may be wiped out. Social media websites nowadays are now exploring more possibilities by incorporating quality news articles, stories and even videos to their website. This boosts the appeal and integrity of the site, and somehow monopolizes the source of information. This may have great effects to traditional media as increasingly more big companies are keen to incorporate such novelties to their channel. This, in effect, allows them to cut down marketing costs as everything is incorporated in one single platform.

The amazing thing about being connected to social media sites is that you can actually know who is around you at a certain place. A new application known as Highlight has created buzz around users with it being a great example of location-based networking. Here, users may check-in their whereabouts during the day, and they can actually view the same users (or even indirect connections) who are in the same vicinity. This, however, is still a questionable trend as it is known to drastically consume a device’s battery due to having the location setting on at all times, and it also spikes the concern of people regarding privacy issues.